The astronomer Nicolaus Copernicus was born on February 19, 1473 in Thorn. His father, Nikolas Koppernigk, died when he was ten years old. Copernicus was then sent to his uncle, the Bishop Lukasz Watzenrode, who took his nephew in and took care of his education.
From 1491 to 1494, he studied mathematics and astronomy in Cracow, where he decided to latinize his name, signing from then on "Copernicus." He then went to Italy for a substantial period of time and studied medicine and law there.
In 1503 Nicolaus Copernicus received his doctorate in church law. At this time his interest in geography and astronomy was awakened, and he concentrated on the writings of the astronomer Ptolemy.
From 1507 to 1517 he set down his perceptions of a new world system in writing, in his "Commentariolus." Copernicus claimed that the sun was the center of our system, around which the planets moved in circular orbits. The earth was said to turn on its axis once a day and move around the sun in a year, as did all the other planets according to their own orbits. Nicolaus Copernicus returned to Poland, to his uncle, who had been appointed the Bishop of Ermland, where he was employed as his uncle's personal physician and secretary.
After his uncle's death in 1512, he became the capitular of the cathedral in Frombork (Frauenburg). There Nicolaus Copernicus concentrated on mathematics and astronomy, beginning his monumental work "De Revolutionibus Orbium Coelestium" ("On the Revolutions of the Heavenly Spheres"). He finished this work in 1530, thereafter turning his attention to a coinage reform; working on mathematics, especially trigonometry; and continuing work on his theories of the heavenly bodies.
In 1543, Nicolaus Copernicus' main work, "De Revolutionibus," was published shortly after his death. His theory of a heliocentric system was gradually accepted beginning in the late 17th century.
Nicolaus Copernicus died on May 24, 1543 in Frombork. 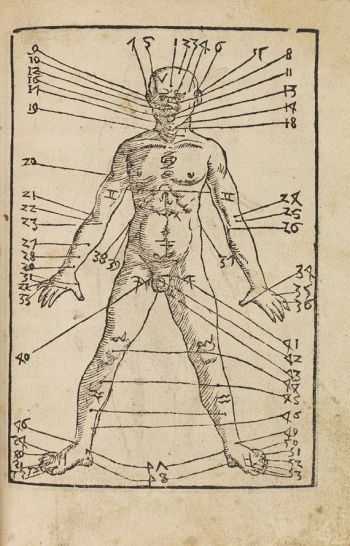 Would you like to sell a work by Nikolaus Kopernikus?